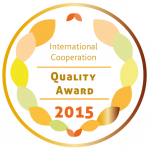 The project „Act Your Job” focused on improving skills for employment and career development for under 25-year-old students through theatrical performance.
The idea of the project was based on the assumption that theatre is a powerful tool for self-development and an effective way of communication. Theatre can support employment searchor training.

There is a lack of innovative methods in training young groups for employment and self-employment, while nowadays, unemployment among young people is a very serious problem of European countries. The project was designed to use theatre as a powerful tool for self-development to help students access a customized training path, find a job, become more active and find “their own way”.

Within the framework of the project, selected groups of students wrote and performed a theatre play. The process of preparing and performing a theatrical play helped to boost their personal and social skills, which resulted in improving their situation in a labour market.

Act Your Job” was a Leonardo da Vinci project funded by the European Union within the framework of the Lifelong Learning Programme (project agreement no. 2012-1-ES1-LEO04-51966 5). Durance of the project was 24 months from August 2012 to July 2014. The project was carried out by four institutions from four countries from the European Union.

In 2015 the project received the International Partnerships for High-Quality Education award.

One peculiarity of the project is that it was implemented by – besides the Hungarian foundation school – two universities and a labour centre, and therefore they could consider various aspects when developing the skills needed to start work or to find employment. The students involved could gain self-confidence and have become more conscious, which can increase the number of successful job seekers and reduce the number of young people who are dissatisfied with their jobs.

This project has been funded with the support of the European Union. This document and its content reflects the views only of the author, and the Commission cannot be held responsible for any use which may be made of the information contained herein.